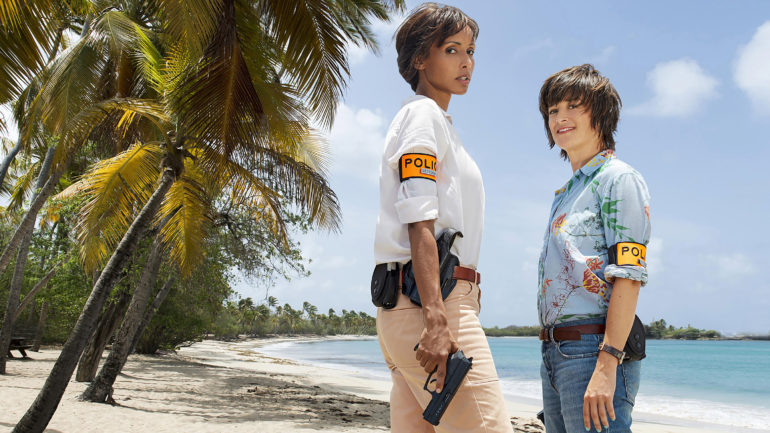 SONIA ROLLAND Under the sunlights success !

The former Miss France Sonia Rolland returns to us in a tandem charm and shock formed with Béatrice de La Boulaye in the successful detective series “Tropiques criminels” on France 2. She also confides on her new film in preparation. Meet this pretty brunette full of pep!

A pair of female cops are back to lead an investigation under the sun. Is this the new secret formula for successful TV detective films (ed: Death in Paradise – Meurtres au Paradis – is on France TV and also the BBC)?

If there was a secret formula, we would know about it already and everything would be a success. But, betting on two slightly badass women, with topsy-turvy up and down lives could be considered a little daring on behalf of the producers while at the same time it does create a certain curiosity among viewers who will follow the adventures of the two female cops. It takes a good dose of audacity and up-to-date stories. I thank the two scriptwriters for their flair and courage and would add that the roles for myself and Béatrice are the perfect fit!

You’ll be back soon for other episodes. Will they, as in the previous season, have a focus on contemporary social issues and is there one you would like to tell us more about?

That’s right, a number of social issues will be dealt with during the coming season. For example, we begin with the issue of people who have become addicted to gaming. Later on we’ll be looking at the issue of drug-trafficking and mules and in another episode narcissistic perverts.

How do you cope with your career and at the same time being a mother when you’re filming somewhere far away?

Ever since they were small my daughters have been used to having a working mother so it’s something they have grown up with got used to. Whenever possible I take them with me. For example, this year, my youngest daughter who is 10 did her third school term in the Martinique and she really enjoyed it.
My eldest daughter was at boarding school and preferred to stay with her friends rather than be cut off from her everyday life and habits and her week-ends with friends. Finally, she chose to join us just for the holidays. I’ve also got a wonderful nanny, Sophie, who is often by my side and takes over whenever I need her. I frequently leave her in charge of my children … My mother is disabled and can’t look after them like grandmothers often do. However my daughters do spend time with her at her home in Burgundy.
It can be complicated to combine life as a mother and have a career at the same time but if you are organised well helped, things work out perfectly well! It must be said though that today a woman’s mental workload is much greater than a man’s. She organises things on a daily basis, she manages a number of different things and except in some exceptional cases, it is rare to see a man with such a workload.

Could you tell us more about your first film for TV “Un Destin” in which we discover from the wings a Miss France election and a candidate’s trajectory to the top. Is it autobiographical maybe?

What I can say is that I am co-producing it with Mother-Production (Harold Valentin), and that if everything goes to plan, we begin shooting in Autumn 2022. It’s not autobiographical but it is based on real facts, and inspired by my own story with parts that have fictionised. It’s about the improbable path of a Miss France candidate.

You are very involved in your association “Maisha Africa” that helps deprived children and more than 600,0000 orphans in Rwanda and that has just celebrated its 20 years of existence. What new projects are there in the pipeline?

Maisha Africa and I have been together now for 20 years. I am extremely proud of this association that has deployed a number of actions over the years. The most recent was the refurbishment and improvement of a neo-natal department at the Musanze hospital. We provided neo-natal equipment such as incubators and respiratory systems thanks to a charity evening we organised two years ago, just before the first lockdown. Unfortunately, we couldn’t celebrate the association’s 20 years because of the sanitary restrictions which were still in place.
But all being said, I think that the time has come to maybe move on to something else… After 20 years it’s normal to want to do something different and there are other emergency situations like climate change that have become equally important. It is also possible to make changes in the field, in Rwanda, with eco-friendly operations and sustainable development programs for example. It’s something I am seriously considering…

What would you like to wish LiFE magazine readers for the coming year?

To experience a peaceful year, to have ambitions and be able to imagine the future and dream big. To dream big in particular!