Nikos Nikos Aliagas, Nikólaos Aliágas, was born on May 13, 1969 in Paris. His Greek parents, Andreas and Harula, met in Paris during the events of May 1968.

He attended a Greek Orthodox school before embarking upon a Humanities programme at the Sorbonne. To earn his independence he began working for Radio France Internationale before moving on to Radio Notre-Dame.

The multi-lingual Nikos Aliagas became war correspondent for Euronews and then, after working as a pundit alongside Christine Bravo on France 2 he left for Greece at the age of 30 to present the evening news before returning to Paris where he was spotted by TF1 in 2001 and chosen to host a new reality programme Star Academy.

The success was almost immediate and over the years Nikos became the channels preferred host. He produces a number of other programmes including 50 minutes inside, The Voice, NRJ Music Awards and C’est Canteloup that is aired after the 8 o’clock news.
In July 2016 he began presenting a new programme 19h Live. Each day between September 2016 and June 2019 he interviewed a different guest as part of his Europe 1 radio programme.

Nikos Aliagas is also a fan of photography and does everything he can to exhibit his works by organising numerous exhibitions, the latest of which was at Cannes and named “L’épreuve du temps” (Test of Time).

Family is also very important for our native of the Mediterranean who splits his time between Paris and Greece with his friends and family whenever he gets the opportunity.

Our handsome Greek is the perfect blend of mythology and reality. 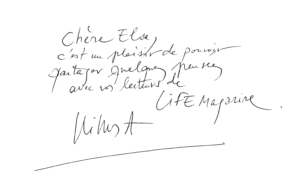