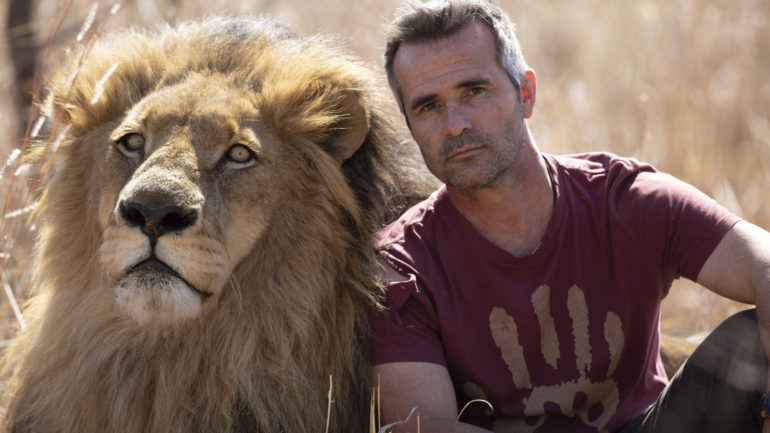 KEVIN RICHARDSON The man who whispers in the ears of lions ...

Kevin Richardson is a South African behaviorist who has worked intensively with indigenous animals in Africa. He knows to be able to create this particular link between him and the felins. Meet with this man, half human half lion…

You are the owner of the Kevin Richardson Foundation and Sanctuary! Could you please give us more information about it and about its purpose?

The Kevin Richardson Wildlife Sanctuary’s mission is to provide a self-sustaining African carnivore sanctuary for the purposes of wild species preservation. Through education, outreach and funding, our mission is to bring awareness to the rapid decline of large carnivores in Africa due to habitat loss, human-predator conflict, the illegal bush meat trade, unscrupulous hunting, disease, and illegal trade(kevinrichardsonfoundation.org) The Kevin Richardson Foundation is a non-profit conservation organisation with nature’s most majestic creature, the lion, at its heart. Launched in early 2018 the foundation is committed to changing and reversing the state of Africa’s declining lion population by purchasing habitat and raising awareness to create safe, natural spaces where lions and other native species can flourish. By partnering with specialised organisations and engaging with impoverished communities on the fringes of these protected areas, the foundation also aims to minimise human/wildlife conflict whilst improving living conditions for local villages.

What made you start the Foundation and the Sanctuary? Could you tell us your story and how your story lead you to start the organization?

I started the Sanctuary as I left a park and had decided I wanted to control the destiny of animals in my care and formed the Kevin Richardson Wildlife Sanctuary ( KRWS ) which was a struggle and had many hurdles to overcome, to try and guarantee lifelong care of the Lions, Leopards and Hyenas at the facility. The goal had always been to start a Foundation, being a public figure, with a large following and the ability to be able to do good. The first time I considered the Foundation was 2011 and then plans came to fruition in 2017 and the Kevin Richardson Foundation started in 2018. The Foundation has 4 defined pillars :
– Acquire and protect land and habitat for Lions and other species
– Educate and empower communities and join with like minded organisations
– Create a community of Lion conservation collaborators to educate and promote conservation
– Maintain and protect the Kevin Richardson Wildlife Sanctuary and bring an end to canned hunting in South Africa 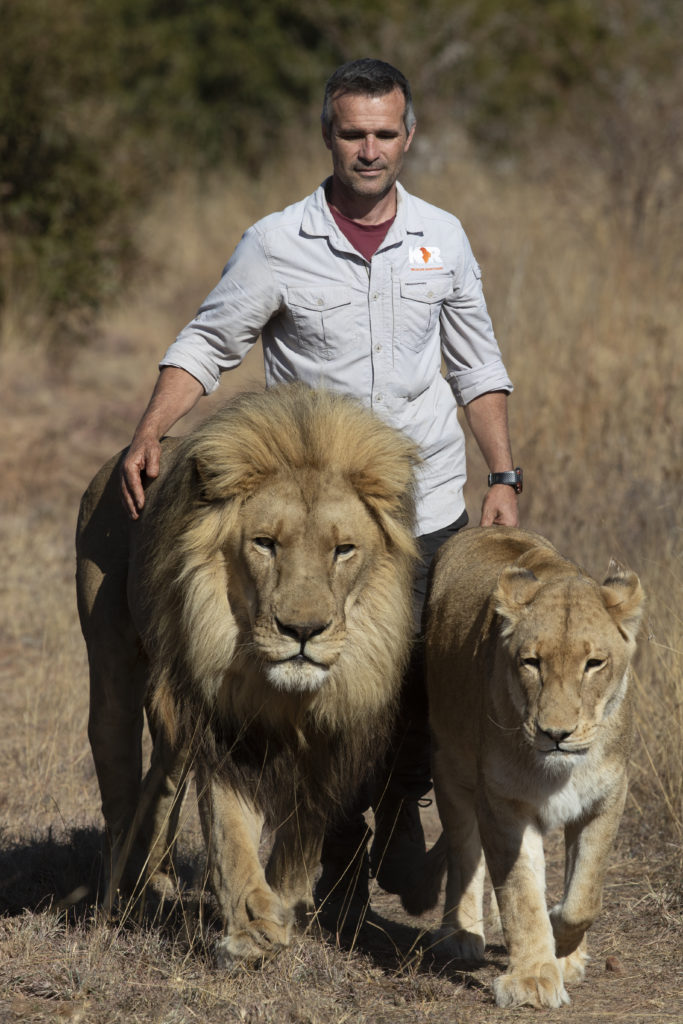 How did you get your nickname “The Lion Whisperer”? Talk to us about the unique relationship that you have formed with the lions through the years!

The story of how the Lion Whisperer came about was in the early 2000’s maybe about 2004 when journalist articles and photos of me appeared in UK media publications. They published articles with “The Lion Whisperer” in the title, it was something that was given to me and not by design. Soon everyone was using it and even if I did not want this, it became how everyone knew me. In the end I just adopted it, as it is how followers recognise me. The relationship with lions I have is unique. I have had to persevere and show a great commitment to these relationships with lions. Firstly I was not afraid, not worried about the what ifs, what might happen, what might go wrong. I was not fearful and I had a great confidence, thick skin, stubbornness, to be able to roll with the punches and follow my great passion with animal relationships.

When was your first encounter with a lion? How did you feel? Please, talk to us about these majestic creatures and why they are heading slowly to extinction!

The first lions I met were Tau and Napoleon in 1998 at Lion Park and it had a profound effect on me. It was the start of the journey and path of working with lions and these 6 month cubs, it made me smitten from the start that has led to me being here some 22 years later still enjoying the company of lions. I knew it was what I wanted to do straight away from that point. I learned that captivity does not do anything for conservation unless you are able to use this to educate and be able to work and collaborate with people like David Yarrow or organisations like Wild Aid. The populations of wild lions are decreasing with habitat loss and human conflict being the biggest threat and main reason. The wild population that thrives is protected by fencing in designated areas, in places like the National Parks and probably approx. 2900 to 3500 Lions are populated in these areas in South Africa.

What are your future plans, for yourself and for the Foundation? What other goals you want to achieve?

The short and medium goals for me is for the Sanctuary to come to a natural end. The animals will not be replaced and all are getting older on a variety of ages. The plan is to open up the facility and look towards a rehabilitation centre for predator carnivores. Somewhere where we can provide an interim care for these predators that may be injured or had health concerns and be able to release back into the wild. If an animal did need life care it would then have to go to a recognised specialised facility for that care. Ideally I would like to be able to obtain more land at Dinokeng or another facility in a different location that would suit this plan, but it does require big funds usually to achieve this. Other plans include education centres for schools and under privileged schools to work towards legislation change and ultimately for canned hunting to cease.

Please, inform our readers how could they contribute and help the Sanctuary?

The Sanctuary is a NPO ( non profit organisation ) and requires ongoing upkeep and care The KRF ( Kevin Richardson Foundation ) has the following link https://kevinrichardsonfoundation.org/donate/ Also people can simply spread the message and awareness and help others become aware if they have no money and any support like this also helps to contribute.

We have been going through an unprecedented health crisis for a very long time, has there been any repercussions on your lifestyle and the lions?

This year has been very challenging and has had a profound effect on me like it has for so many people. We lost the volunteer programme, the day tours, events, filming and it has meant I have had to focus on the Lion Whisperer TV channel and still provide quality content in difficult circumstances. I am well aware I have been fortunate to keep going and keep carrying the flag. There are a lot of wildlife institutions that may not survive these times and charities have suffered. I have also looked at future projects to ensure we plan ahead and have adjusted to the situation. The lions have had good care throughout and only the behaviour has changed slightly, some have enjoyed less human interaction, ( mainly the older ones ) and others ( mainly the younger ones )have been a little more restless. I have had to alter my work approach and take on more jobs and different jobs to what had been my usual routine.

A main hope globally that Covid-19 is resolved and has become manageable. This will help tourism and population movement again. That we can recommence the Volunteer programme and the Day Tours at the Sanctuary to all visitors, which will help our conservation goals. This year has halted all plans for everybody and also for us here. I wish to reset the goals and help establish action for the Foundation that we had planned. 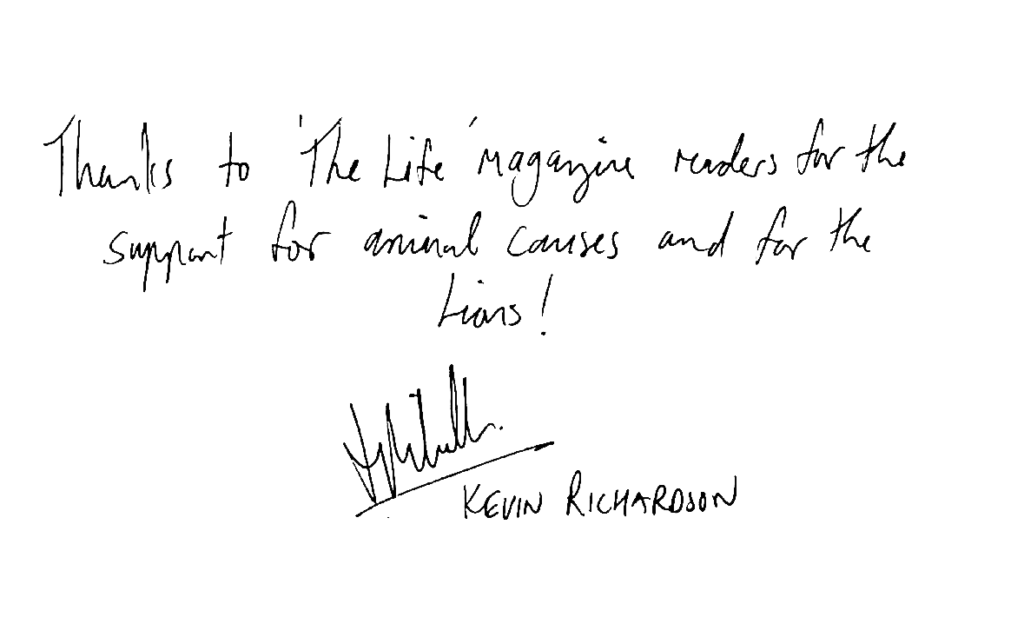