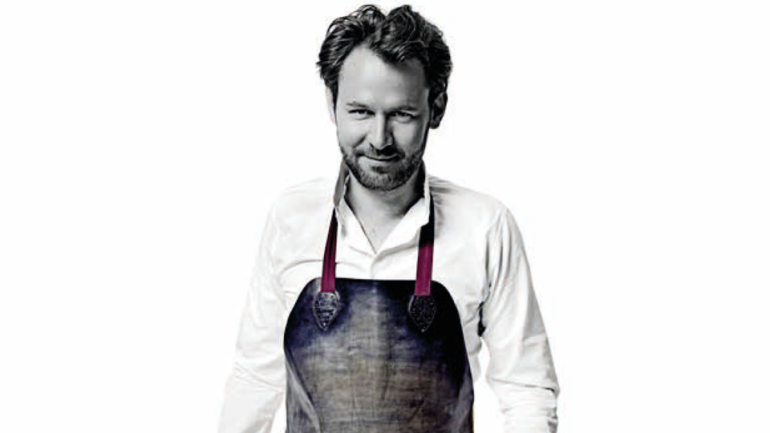 Mathieu Pacaud, one of France’s most starred young chefs, from Paris to Macau, welcomes us to his world of a thousand flavors … Meet a talented chef.

Mathieu Pacaud, son of Miche – lin-starred chef Bernard Pacaud, was naturally immersed from an early age in the world of gastro – nomy, a savoir-faire and art he adopted and went on to develop. He started working at the age of 15 with Benoît Guichard (a for – mer chef under Robuchon) before moving on to join Eric Briffard at the Plaza Athénée.

He then left for Lebanon to work in a number of establishments before returning to L’Ambroisie in 2003 alongside his father. Both creative and ambitious, he managed to cut loose and begin updating the more traditional French dishes. 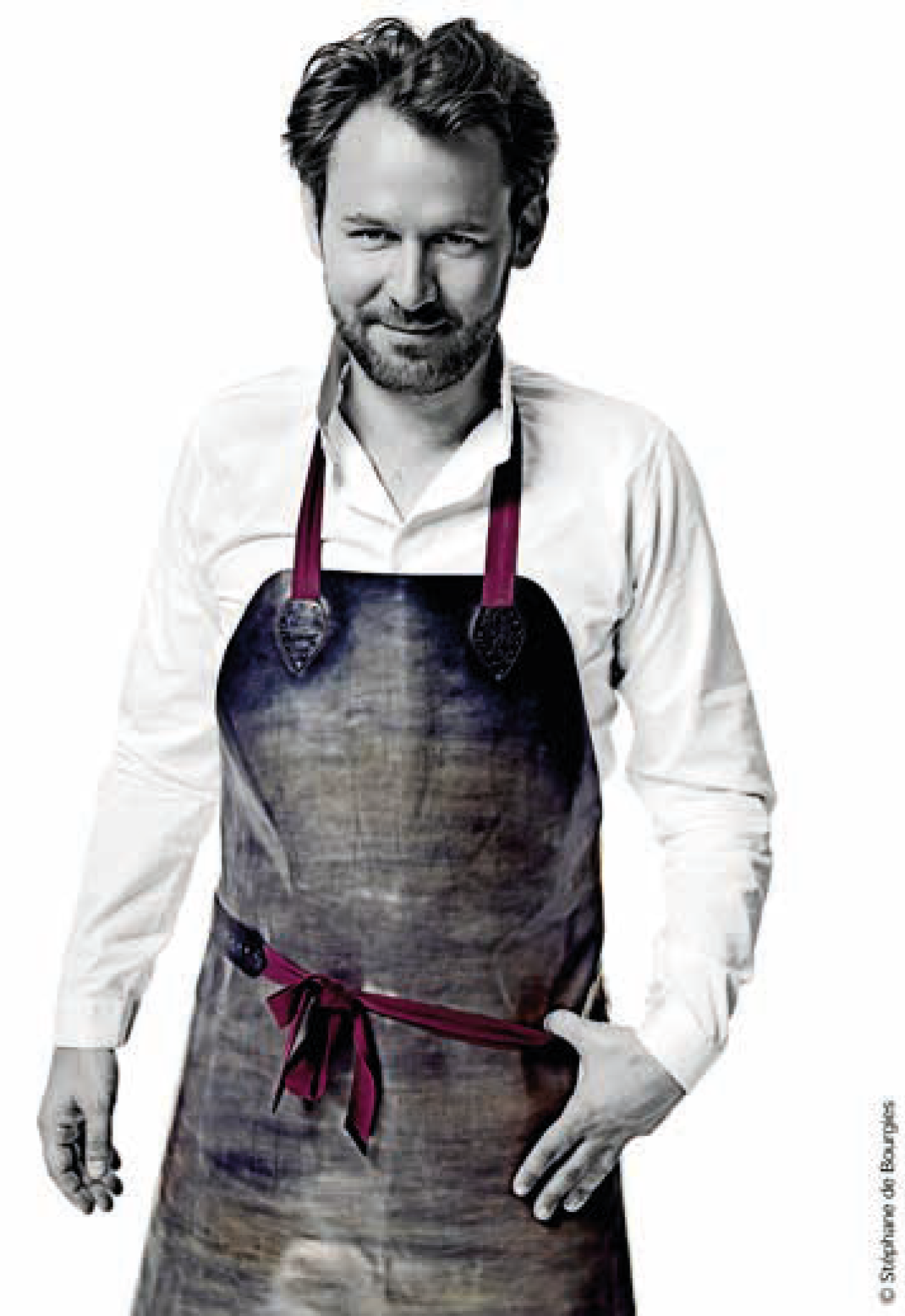 After proving his worth at L’Am – broisie, soon to be inaugurated in Macau, and his two culinary labo – ratories Hexagone and Histoires, Mathieu Pacaud took over the kitchens on two Parisian culinary institutions: the legendary Divel – lec and Apicius…

The starred chef, who recent – ly opened the Beauregard in Saint-Germain, is also behind the culinary offering at the luxurious Anne gourmet restaurant within the Pavillon de la Reine, Place des Vosges. 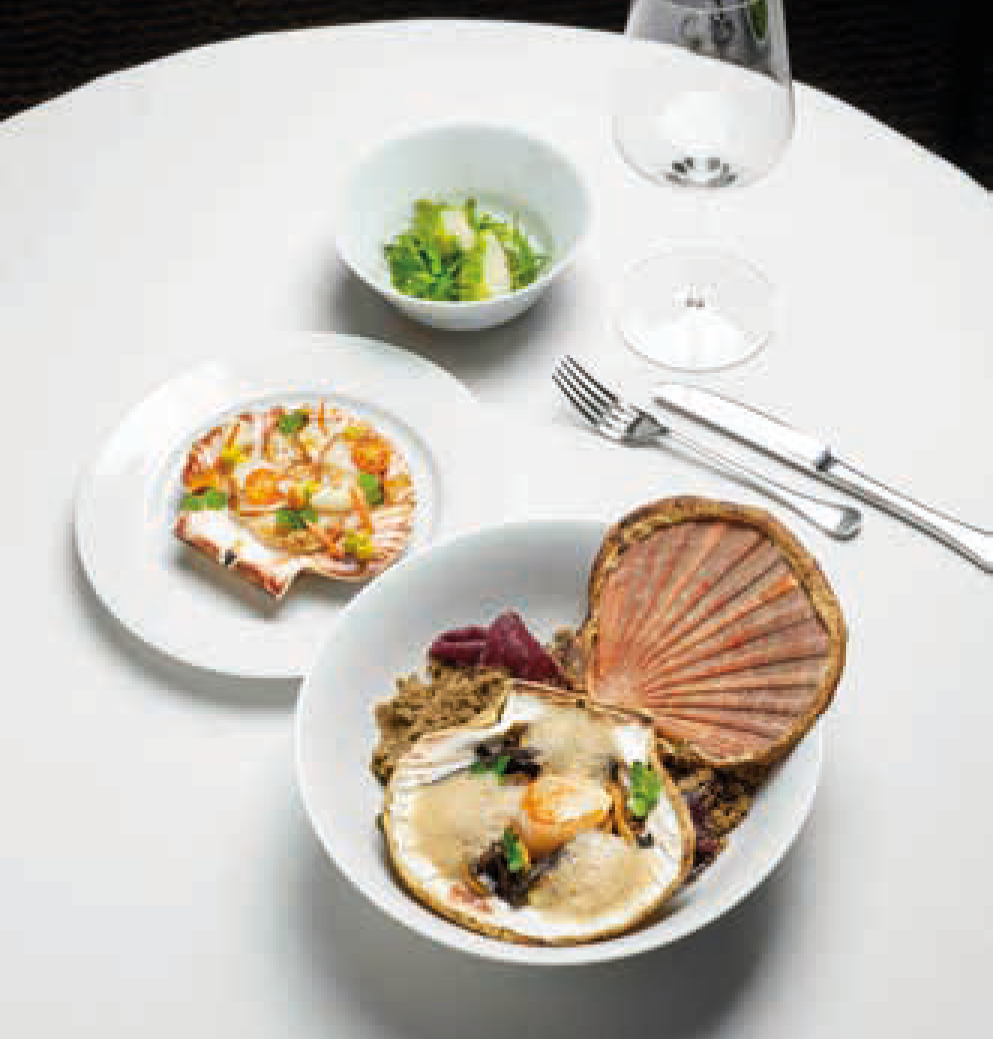 Each summer Mathieu Pacaud re – turns to his Corsican roots where he enchants guests at Domaine de Murtoli, bringing out the very best of local produce in the simplest of ways.

Mathieu Pacaud is a name to remember in the closed circle of Miche – lin-starred chefs.

“Rigor is the nerve of war” 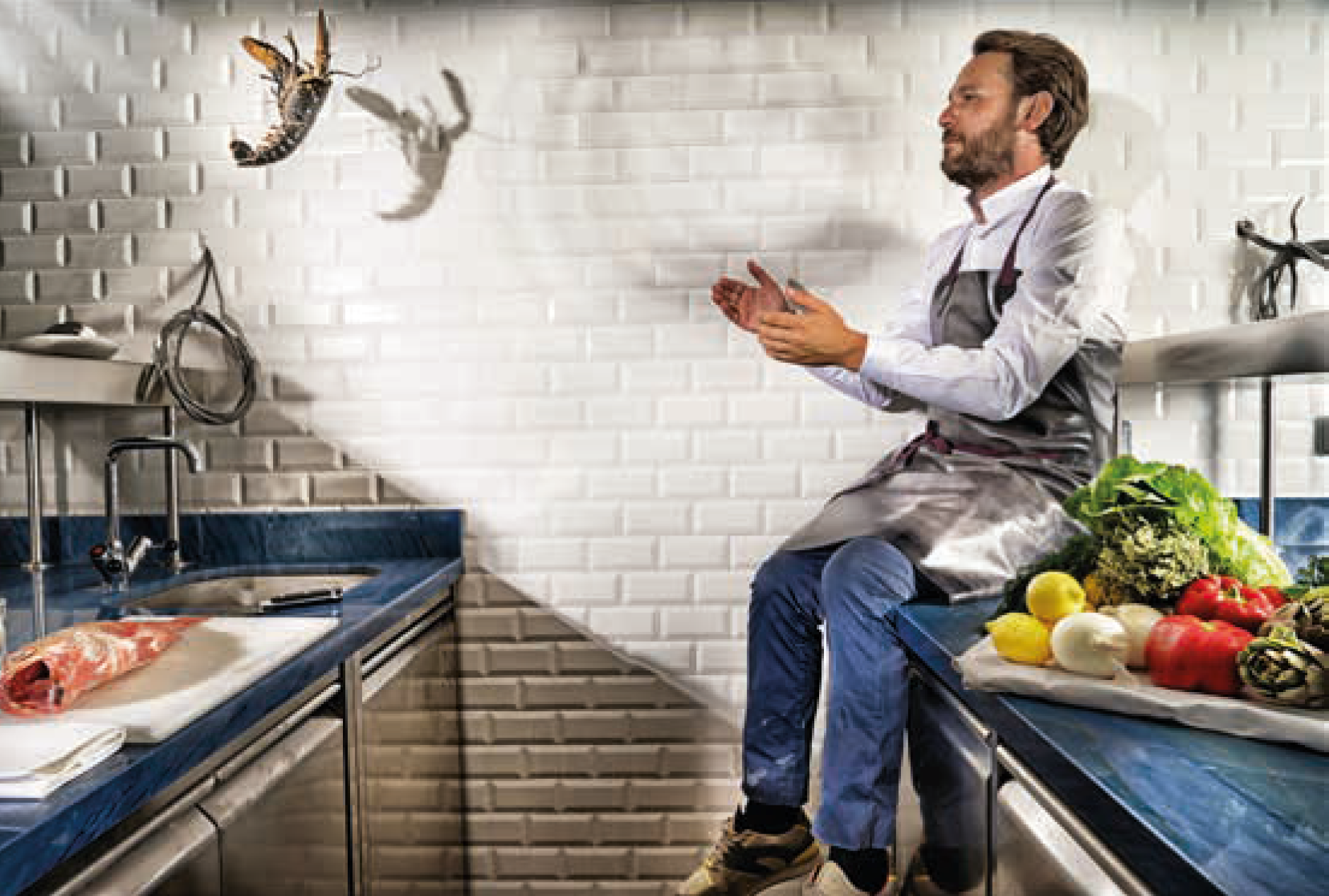 From Paris to Macau, not forgetting Corsica, Mathieu Pacaud, one of France’s most starred young chefs welcomes LiFE to his flavour-filled universe … Encounter with an immensely talented chef.

You are a member of France’s closed circle of gourmet chefs. Was your choice of career an obvious one?

Cuisine is all about passion. It’s like a calling that revealed itself to me at an early age. As a child I was immersed in the world of gastronomy alongside my father, Bernard Pacaud, at L’Ambroisie, Place des Vosges. I learnt a huge amount from him before moving to join Benoît Guichard at the Jamin and at the Plaza Athénée with Eric Briffard to complete my learning process. Today I have my own restaurants and nothing is never boring!

How would you define your cuisine?

I am lucky in that I have several restaurants which means I can explore many different scores. Apicius or Le Divellec, Anne, Le Domaine de Murtoli or my latest, “Beauregard” in Saint-Germain-des-Prés, allow me to permanently create, this is what defines me best, I can never get enough. I am always seeking to reveal the best from the best quality products along with my teams.

Does your passionate nature reveal itself in your cuisine?

The energy I have is most visible in the style and design of my restaurants. Each detail is important to create an atmosphere and this goes to showcase my cuisine. My dishes are more the result of hours of research. They are thought about, tried and tested, accepted. It all comes down to rigour .

Today you are running the kitchens of the emblematic “Apicius” and “Divellec” restaurants, offering them a new lease of life. What does such a challenge imply?

What is important is that each guest is satisfied, at each meal and in both restaurants. You always have to seek perfection and never assume you have achieved it.

You have also taken over at the “Anne” gourmet restaurant within the Pavillon de la Reine, Place des Vosges. Why did you choose this umpteenth address to express your talent?

The intimacy and romanticism of the address immediately won me over. The place is like a gem in such a beautiful square. Also it seats only 20 guests, so again, something unique. 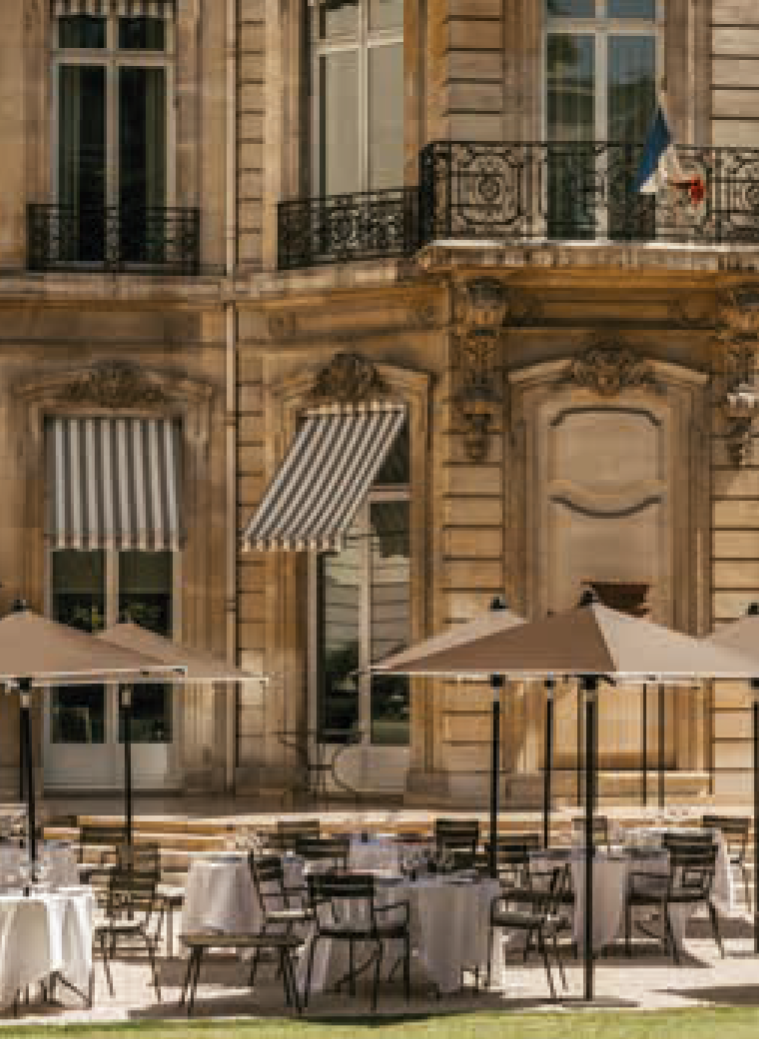 Each summer you move out to your Corsican base the Table de la Ferme at Domaine de Murtoli. How important is it for you to put your bags down there each year?

Very! It’s a wonderful place where we can bring out the very best of the domain’s produce. It’s also about friendship, with Paul Canarelli, and a family thing. Here I can rediscover my roots.

How do you go about keeping an eye on what goes on in each of your restaurants?

It’s all about teamwork. My teams are absolutely fantastic and I know I can count on them. Until a project has been brought to its conclusion, I remain involved to be sure to get the best possible results.

You published a book late 2018. Did you feel a need to share your recipes with your diners?

I wanted to showcase all the talent of my teams, to permanently display the beauty and quality of our creations. Together we produced 350 recipes for this initial volume that includes 800 pages. It was a challenge, but very exciting!

What are you most proud of?

My daughters, who already love cooking …

Is it not too difficult to find a good work-life balance?

No, because the two elements come together to become one. My life is made up of compartments and when like me you have a passion in life, everything comes together and falls into place.

What would you wish for LiFE readers?

To love things enough to make the most of those very special times! 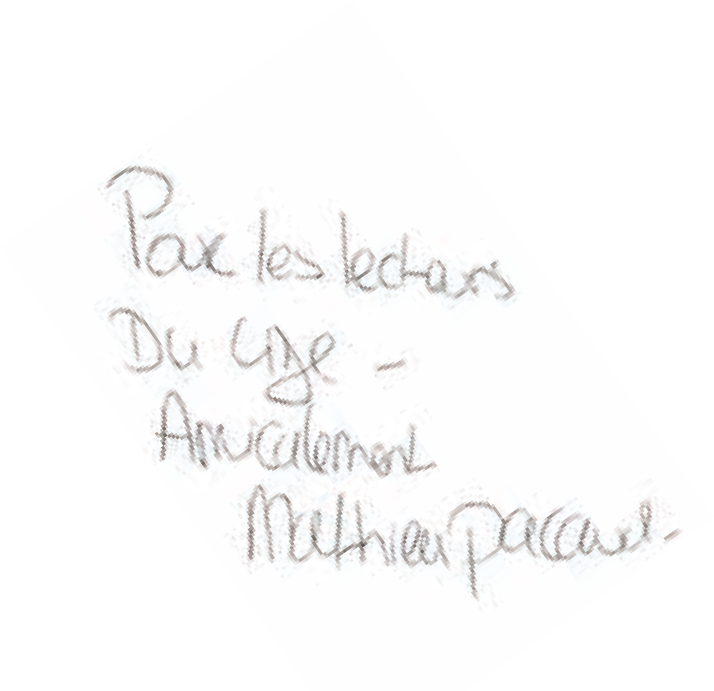