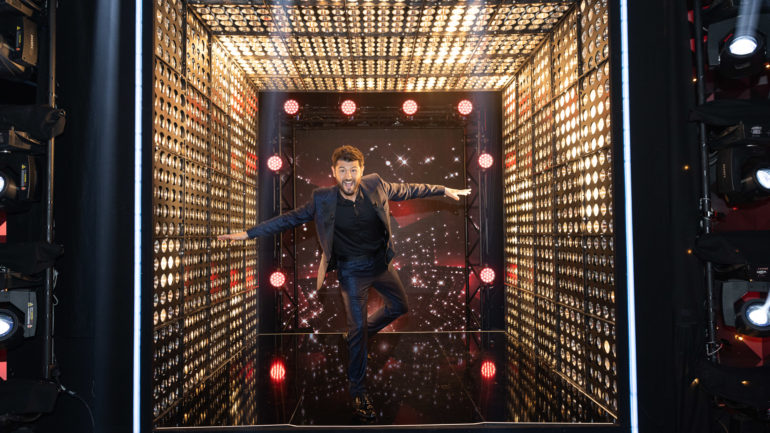 CHRISTOPHE BEAUGRAND A child of the TV

You present a number of different programmes such as Ninja Warrior alongside Denis Brogniart,
the Grands Bêtisiers, the lotto and you are also a member of the Grosses Têtes team on RTL radio…
Fun and games clearly feature prominently in your career and yet at the same time you appear on LCI’s weekend morning news programme. How do you manage to juggle between these two diametrically opposed styles?

I think I am extremely supple, I can do the splits easily! But more seriously, I’m just doing my job! Whatever it is, I do it with the same amount of energy and desire to share it with the viewers. At times to entertain, at times for fun and at other times to inform. At the outset the thinking is the same: to communicate with other people.

At the same time there is a huge difference between the people you interview!
You can switch from Céline Dion to a politician and appear equally at ease, what is your trick?

I guess it may seem surprising but for me, honestly, it’s the same job: a journalist is someone who is constantly curious about everything! Particularly other people. So to interview a government minister is the same as interviewing a singer. You work on their biography, do your background check and prepare the questions. Then, you sit down in front of the person you want to interview and try to get the most interesting answers possible for those watching. More than anything else it’s all a question of sincerity.

You are something of an all-rounder, like a chameleon, who adapts to the situation. What new challenge would you be tempted to take on?

I’ve always got new projects lined up, but as far as TV is concerned, there is often a gap between what you would like to do and what is done! I’d love to present a variety show and also some fiction which is something I’m working on right now… 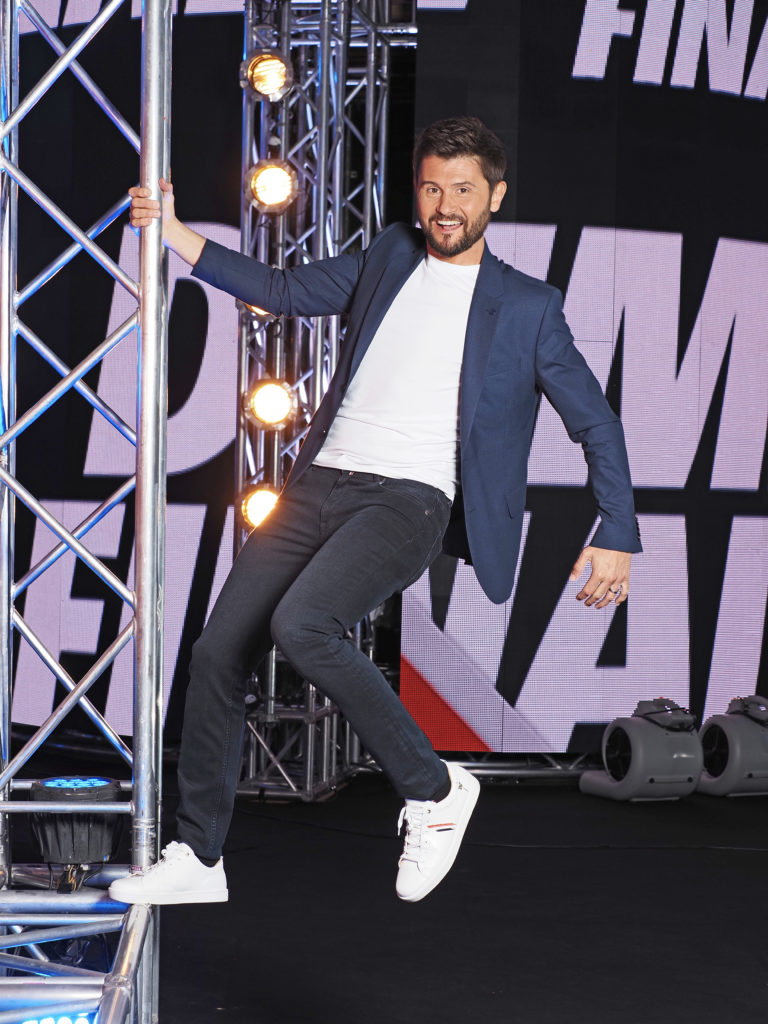 So producing or playing in a film could happen?

I’m in the process of working on the adaptation of my book FILS A PAPA(S) for the television. I have signed up with a production company that liked the storyline but I don’t know if we will manage to create an interesting scenario we could then sell to a channel. But I have to say it’s an exciting and motivating challenge.

Could you tell us a little more about NINJA WARRIOR that you co-present with Denis Brogniart and Iris Mittenaere. What was it that attracted you to it?

To tell the truth, when I first heard about it I didn’t apply because I simply couldn’t imagine myself presenting such a programme! It was the channel’s idea to line me up with Denis, who I already knew. The idea was to create a complementary duo and it worked straight off! We found the right balance between sports commentary for him and humour for me. We’ve learned a lot from each other. Also, the programme is a lot about values: pushing the limits, merit and effort. I really am proud that families get together to watch Ninja year in year out. It has become a not-to-be-missed event for a lot of people.

You are heavily involved in a number of associations like Le refuge, Sidaction and “A Daffodil against Cancer” for the Institut Curie. Is this your way of using your fame to help causes that are important to you?

It’s the least I can do! When you become a public figure and people want to see you, you need to know how to use this and turn it into something useful. For my fight against homophobia for example I use different methods. I try and give more visibility to homosexual couples and homo-parental families via interviews, photos on the social media, my book, and so on. The “Refuge” association is something I am very attached to because it welcomes in young people who have been thrown out by their families simply because they are homosexual. I was a victim of this when I was young, when I was living with my grandfather in Bordeaux for my studies. Fortunately the rest of my family came to my rescue, whereas in many other cases “Le Refuge” is vital to help kids get back on track and regain confidence in themselves.

Which personalities inspire you most? You are good friends with Nikos and Denis Brogniart, maybe you have a little story or two to share with us?

I always dreamed of doing what I do… and when I was a child, I used to listen to Laurent Ruquier’s first programmes on the radio and decided I wanted to work with him.
Then, when Star Academy started up, I would watch it without knowing that one day Nikos would become a close friend.
And my dreams came true! There are many people in this line of work who inspire me and whom I admire. I think Philippe Gildas, who I got to meet, is just brilliant. I really admire Thierry Ardisson and Christophe Dechavanne also. There are many artists also who impress me more than inspire me such as David Lynch and Mylène Farmer. The splits once again you see!

I’ve heard you are a good cook! Is there a recipe you’d be prepared to share with us?

There are so many! I don’t know if I’m a good cook or not, but I enjoy cooking. My favourite dish is my grandmother mammie Jeanine’s stuffed tomatoes. It took me a while to decide to cook them, I didn’t dare because I thought I could never cook them as well as her. In fact, my stuffed tomatoes are delicious. I needn’t have waited so long in fact!

What I enjoy most and that has become a sort of ritual along with my son Valentin is to read him a story before going to sleep. I try and act it out for him and he absolutely loves it. It’s a special time. I clearly recall the same feelings I had when I was a child and I love to think he’s getting to appreciate the same thing.

Usually you ask the questions! What question have you never been asked and that you would like us to ask you?

Ha ha ha, not that one for sure! In fact I don’t think I’m good at answering questions so I prefer to be surprised by a question and answer it spontaneously.

What would you like to wish LiFE Magazine readers?

Happiness more than anything else! For them and everyone else! To learn to accept those around you despite their differences.